The Challenges for our women racers

We have some strong women who train and race with the team and riding as a woman in mixed teams in ZRL is entirely possible and enjoyable, although it can be difficult to really compete for prime points or be anywhere near the front.

This is especially true if you’re 45-65kg and many of the men you are racing are double your weight. The prospect of a good finishing position can often all be lost within the first 5 seconds of a race when watts of 600-800 are reached and you’re struggling to hold 300W.

For new riders this can feel like they’ve let the team down, but if expectations are clear before the start and a race plan other than “win” or “score lots of points” is created, mixed ZRL races can work for women.

How our Women’s team started

Some women were already with CLS but avoided mixed ZRL racing, others were new to CLS, and a few were even completely new to Zwift. By Christmas, it was becoming apparent that we might get a C and a D team together, and the effort that went into onboarding all the new riders was huge! Once we had 6 riders of each race category, the teams were entered, and plans started to hatch.

Building a strong, and supportive team

The cat C riders had some race experience on the most part, but the cat D riders were very green, so we created a private chat channel in Discord for any questions to be asked – without the worry and embarrassment of all the experienced CLS racers seeing.

Next, we looked to build the foundations with some values and goals for Season 2:

How did we perform in Season 2?

As it turned out, building the strong foundations led to extremely strong team performances, with the Category C women’s team qualifying for the playoffs and finishing 10th overall (out of 144 teams globally), and the Category D women’s team also qualifying for the playoffs (having won their league) and winning the entire division (out of 59 teams globally) after winning the playoff TTT by over a minute and coming second in the points race. 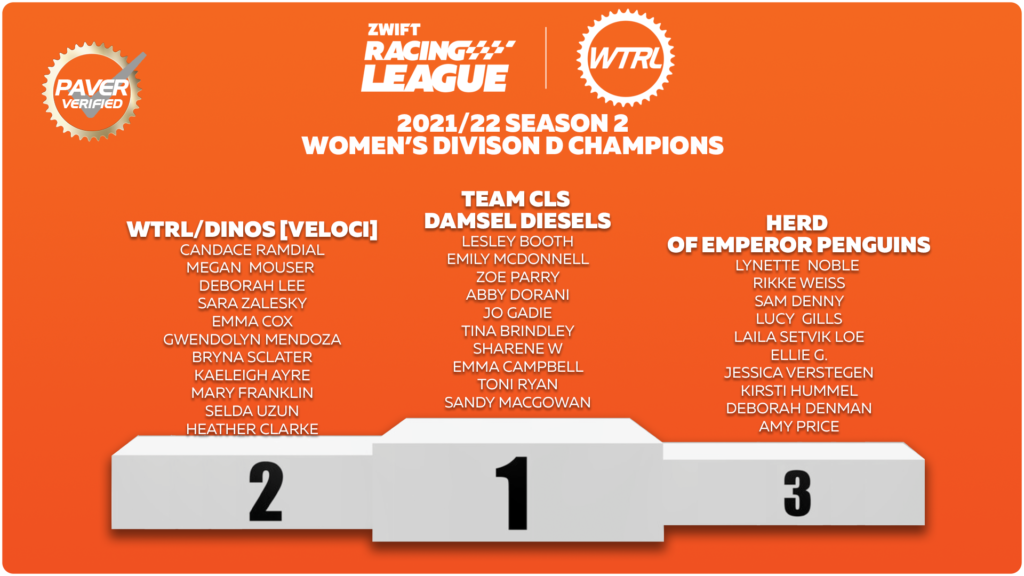 In addition to this, four of the cat D women upgraded to cat C and one of the cat C women upgraded to cat B. In total, 10 women raced for the cat D team and 11 women raced for the cat C team (one rider raced for both). Three riders also raced in mixed teams when rested from the women’s teams. Amongst all this, we dealt with at least 3 cases of Covid, a few injuries and some riders even managed holidays (but joined the voice chat on race nights to encourage their teammates).

For Season 3, we will have two cat C teams, with the victorious Damsel Diesels moving up to cat C to become Classy Diesels and continue developing together. Recruitment is underway for a new cat D team and an all-new cat B women’s team. Season 3 is likely to see lower numbers as riders choose to ride outdoors more, but we are confident that a solid base of women has been built, who are all looking forward to racing again for Team CLS.

I'd highly recommend any ladies who don't currently race to, at the very least, reach out and have a go. Maybe you don't ride at all at the moment, enjoy riding solo or just doing workouts, but it has to be said that the racing for most of us has been immensely enjoyable, hugely challenging and very rewarding. The CLS Diesels squad has proven to be a friendly and supportive environment in which to develop and even make new friends. If either you or someone you know is interested please don't hesitate to get in touch.